Why is it necessary to choose the symmetric thyristor voltage converter for controlling the electromagnet PNTS-220.A?

At present, the following voltage converters for the control of the electromagnet are present on the Ukrainian and CIS markets: PN-500, PNS-300 / PNS-600. They are manufactured in Kirov, Russian Federation.

The voltage converters PN-500 and PNS-300 / PNS-600 are of the same type and are executed according to the schematic electrical diagram on the Figure 1 with insignificant differences. 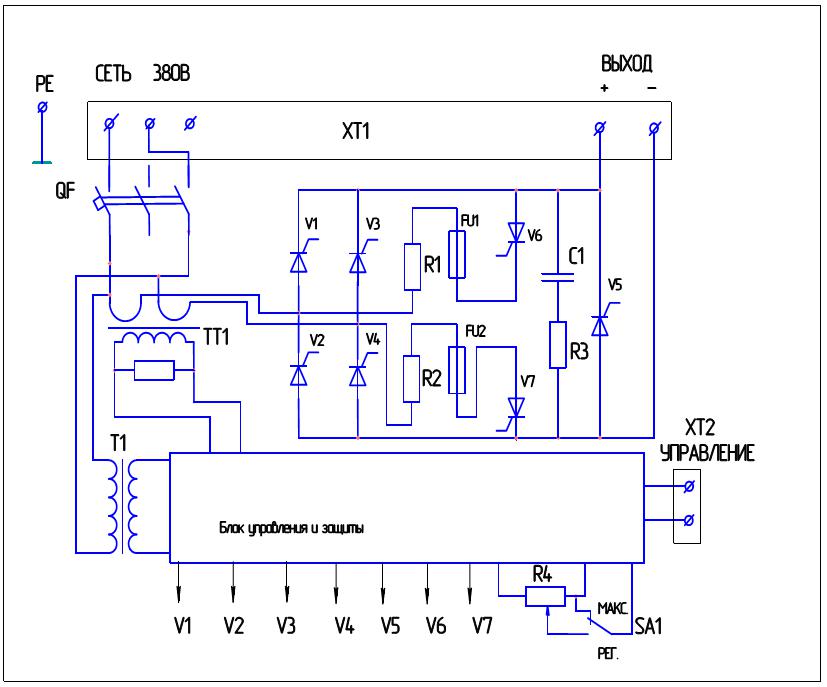 As is seen from this diagram, the connection of a load to a three-phase voltage source is unbalanced (a controlled single-phase bridge is connected to a line voltage between two phases, for example, A-B, and the third phase C is not involved).

As is known from the theoretical science, if one or two phases are overloaded, then a       drop in voltage occurs and vice versa, an undervoltage phase increases the voltage from the nominal, this phenomenon is called the electrical unbalance.

Since the current which is consumed by the electromagnet, as a rule, is in the range of 40-200 A, such a schematic solution will cause a significant electrical unbalance.

Let's look at the consequences of using such voltage converters.

As is known, asynchronous electric motors are usually designed for a service life of 15-20 years without heavy overhaul provided that they are properly used. Under the proper operation, its operation in accordance with the nominal parameters specified in the passport data of the electric motor is understood.

What can lead to the electrical unbalance?

Inadmissible imbalance of the voltages in the phases leads to the appearance of magnetic fields moving opposite to the rotor rotation. The rotating magnetic field turns into the elliptical from the circular which leads to radial vibrations and destruction of bearings and windings. It leads to electrical imbalance and strong heating. Long-term work on the limits of the coefficients at a load less than the nominal reduces the service life by 10-15%, with a nominal load - twice. If the imbalance is 50%, the service life is reduced by 5-10 times!

As a consequence, the service life of the electric motor can be reduced to 2 years instead of the passport 15-20 years!

As for other devices and the crane electric appliances,  the imbalance of the phases is the reason for their malfunctioning, failure, fuse blowing, insulation depreciation, burnout of the contactor coils, accelerated depreciation of the mechanical part of the contactors, etc. up to their breakdown.

Considering all the above, our company decided to develop and produce a symmetrical thyristor voltage converter for controlling the electromagnet PNTS-220.А.  It was realized in 2014.

When developing the PNTS-220.A, we were guided both by advanced scientific achievements in the field of power electronics and by the standards regulating the quality of electricity and electromagnetic compatibility.

When developing PNTS-220.A, we were guided both by advanced scientific achievements in the power electronics and by standards regulating the quality of electricity and electromagnetic compatibility. This made it possible to obtain a product of European quality, having a lead over analogues of the Russian Federation. It is the best choice for all existing criteria at the same price level within the conditions of the instability of the hryvnia exchange rate and the slowing of the industrial growth rate.

A circuit diagram of a thyristor voltage converter for controlling an electromagnet PNTS-220.A is shown in Fig. 2.

As can be seen from the diagram, the connection of the load to a three-phase voltage source is symmetrical. The controlled three-phase bridge is made according to a 6-pulse scheme, which provides the supply network with the least distortion.

The load cycle is increased, due to the use of active cooling (fan blowers M1, M2), which is especially important in the summer.

A high-precision digital current sensor is used. In addition, the industrial network Modbus-RTU is implemented in PNTS-220.A, which allows placing the voltage converter in the machine room or cabinet, and the operator panel is implemented directly in the operator's cab. 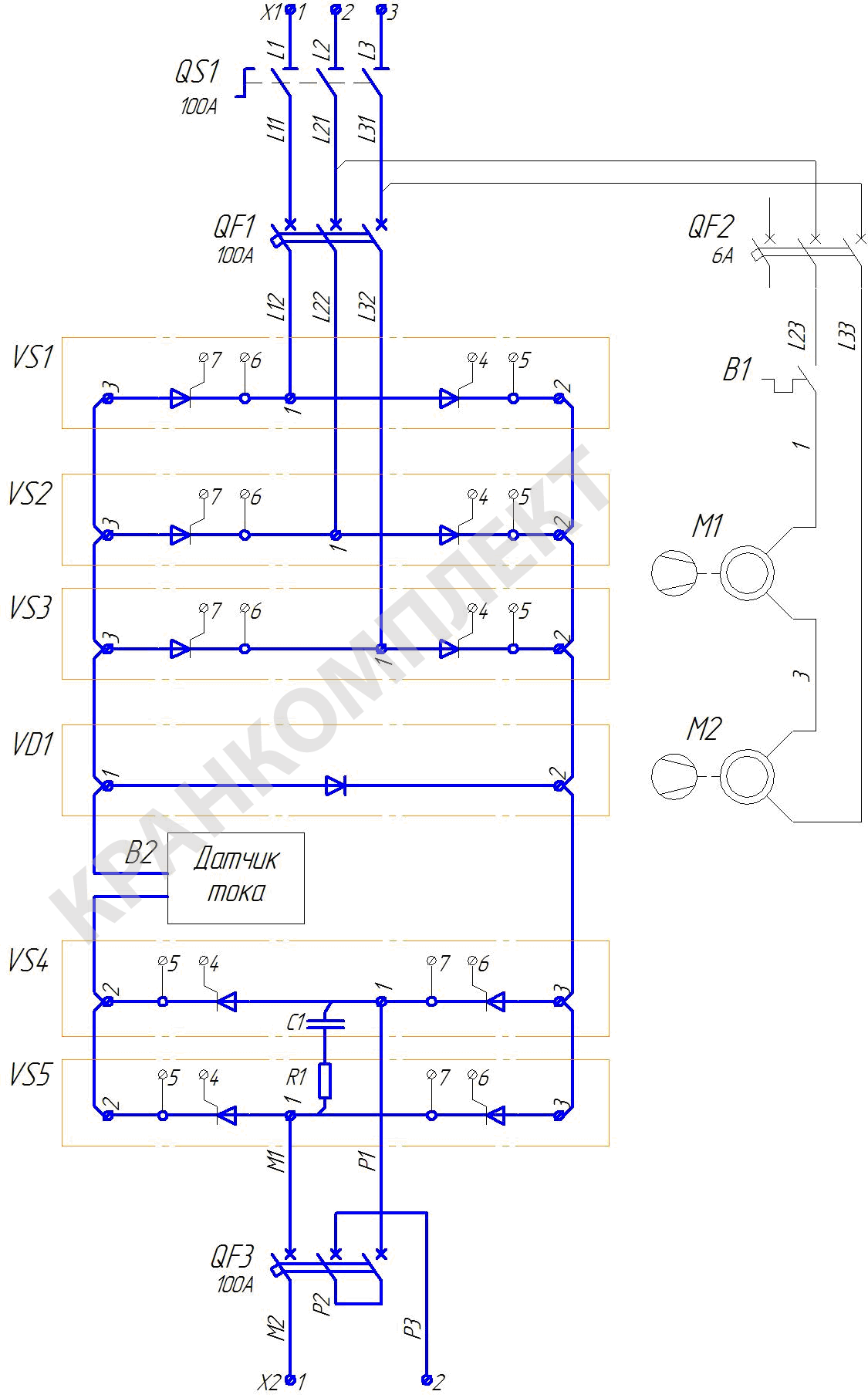 It is also worthwhile noting that a circuit diagram of a thyristor voltage converter for controlling an electromagnet PNTS-220.A is a product produced in Ukraine and this guarantees fast and high-quality service. 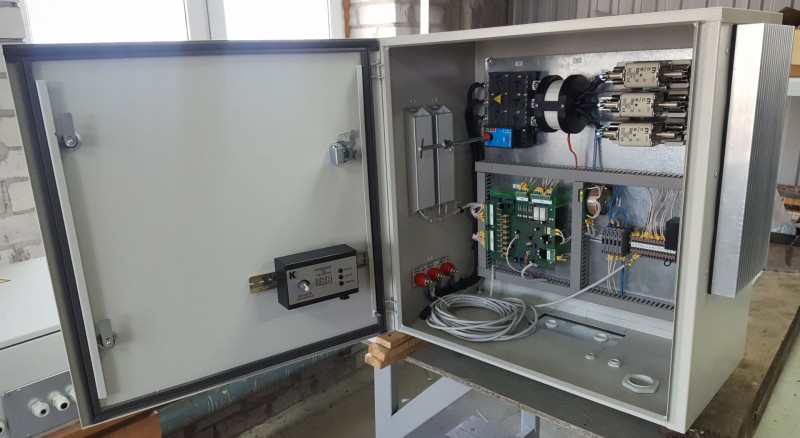 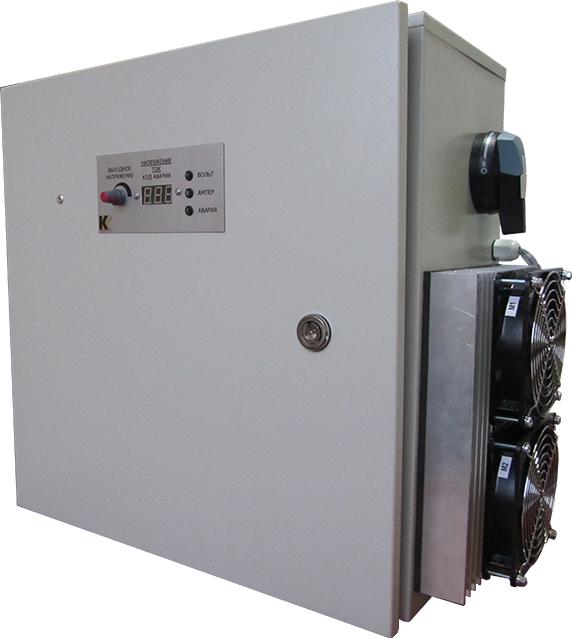 2015 year is a crucial year for Ukraine after all, because due to logistics problems with the CIS countries, large machine-building, metallurgical, mining and other enterprises from Ukraine will be forced to abandon the old outmoded electrical equipment in favor of a better and modern Ukrainian production.

If we support the domestic producer and do not invest in the development of the economy of other countries, we will be a rich, technologically advanced and popular country, and the sales geography will expand far beyond Ukraine. 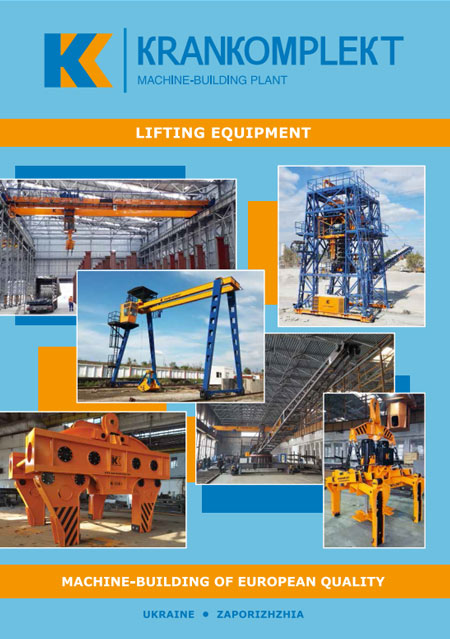